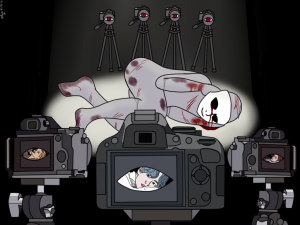 Examination of a Digital Illustration

This is a digital art piece depicting a person in the middle of a circle of cameras. There are seven cameras on stands, with on eye in place of a lens. The eyes on the back four cameras are red and the eyes on the front three cameras show different people in them. There’s a large, bright spotlight shining on the person in the middle, who is kind of curled up into a ball on the floor. They have a white mask over their face, and there are bruises, scrapes, and blood all over them.

Most of the colors used in this piece are very dark and are mainly gray, which helps to show the emotion in the art. The contrast of the spotlight and black background also helps to create the main focus, which is the person in the middle being stared at. By using a color scheme of not-so-colorful colors, it helps the red pupils and scratches in the piece, as well as the people in the screens of the cameras to stand out.

I think that the artist was trying to communicate the concept of people’s self-image, as well as how they appear to others). A clue that supports this idea is the fact that there is a spotlight and many cameras all pointed at the subject in the middle. This can represent everyone judging or just paying a lot of attention to the person in the piece. That person is also wearing a mask, (which can represent how they appear and their image), and they have scratches, bruises, etc. all over their body, which may show how there’s such a high standard that people are trying to reach in terms of their appearance and they way they come across.

I think that amount of detail is really nice, especially on the people in the camera screens. There’s so much attention to the little things, which really takes the art to another level. I also think that the concept behind this piece was communicated very well and very clearly, while still leaving room for interpretation from the viewer. One thing I think you could work on is just cleaning up some of the lines. Other than that, it was really great!

I see a lot of ironic art within the project. The addition of human made objects into the setting of the Earth’s natural nature brings an interesting and ironic twist to the message you are stating about the mistreatment of Earth’s environment. Next to the art, there are environmental facts about the Earth taken from Global Citizen.

I like the very simple color palette and art style. Making the art style to complicated would have made the focus to complicated. Keeping things simple makes the message simple and to the point, which works very well for the project. It doesn’t complicate the viewers’ focus or the projects’s factual message.

I believe that this project is giving a very straight forward message that the environment has and still is being mistreated and harmed by humankind even today. The addition of human made objects to the setting of Earth’s nature gives an ironic viewing of how humans’ man made objects are hurting the environment in different ways. The facts taken from Global Citizen supports the art with actual information about the issue and message.

Looking at a Digital Drawing

On The Road of Life