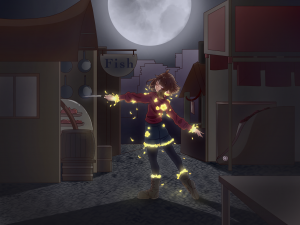 The artwork is focused on the girl in the middle of two structures. They seem to be part of a market street or a small town of some sort with the left one being designated for fish and the right side being unnamed. There is a lot of detail in the smaller things such as the food items and the stash of reddish brown items in the corners. The background has a moon and a couple of tall buildings that are shaded purple. The girl in the middle is covered with glowing yellow flowers around the edges of her clothes. She is also holding a knife and pointing it toward the left. Both the flowers and the moon are illuminating her.

The style looks to be anime inspired and so it uses a type of cell shading style. A lot of the background is filled with a gradient shading, such as the possible city in the background. The buildings have less shading than the girl, so it shows where the focus is. The girl has more highlights and so it draws the viewers eyes back toward the center. It also makes it feel like she is a lot more alive than the buildings. The little details also give it a lot of character and the whole composition makes it feel holes. Almost all the space has information in it.

The message could be around the topic of gracefulness. The character in the artwork is very elegant with their eyes closed and in a ballerina-like pose. The area is also filled with other things but the person is by themselves. But it could also be about dancing with dangerous things.

The art looks like it took a lot of effort and it paid off. The art is aesthetically pleasing and the lighting makes it look dynamic. Adding a atmosphere to it through objects is a hard thing to do but it works. One thing I think that could be improved are the buildings in the back. The flat coloring makes them look a little strange in this perspective. The table on the right also seems to create an imbalance in the drawing where more space is taken up on the right than the left.